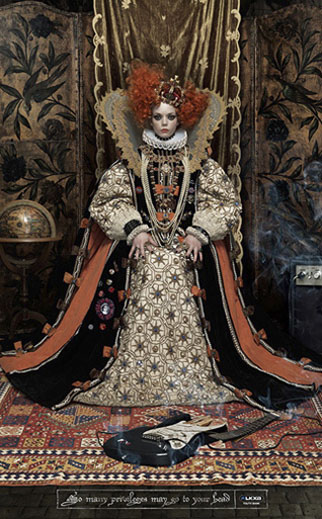 I am a Creative Designer and Artist that designs, and makes in many forms and mediums.

My father the late David Lawes, was a Scenic Artist working for theatre companies such as the Royal Opera House & ENO and this whet my appetite for working with many mediums, production design & all things theatrical. My interest in Tech-effect costume also blossomed from a young age when he worked with the amazing costume designer Eiko Ishioka. My mother was a brilliant potter, and that inspired me to work with clay, to sculpt & to model make.
I went on to study at Chelsea College of Art & Design in 1994 where I honed my skills in painting, sculpting, design & illustration.

In 1996 I began a HND Design / Fashion Styling course for Hair & Make-up at the London College of Fashion, where I then applied my Art skills to Hair, wig making, Fashion & Beauty Make-up, Body painting, tattoos & air brushing.
Since 1998 I have been a Hair & Make-up Designer for numerous Television, Film, Production Companies, working on everything from Commercials to Film, from Music Promos to Fashion/Beauty/Advertising shoots.
I have worked with a diverse range of people such as Director George A. Romero and Photographers Anderson & Low. I also regularly work on Beauty/hair shoots & have been Beauty Editor for various magazines.
I am a regular make-up and hair artist for Music artists & actors such as Anna Calvi, kate Nash, Ladyhawke, and Rowan Atkinson. Also Harvey Nichols and Katharine Hamnett.


SPECIAL-FX, PROSTHETICS & TECH-EFFECT COSTUME
DESIGNER
After completing Special FX & Prosthetic courses, I later went on to design for Channel 4 & Discovery Channel. (I sculpted, made molds for prosthetics & entered into the world of Creature Creations and Tech-Effect Costume.
I create anything from giant gothic blackbird/Angel wings for Daisy Lowe on an American Eagle advert, to dark fairy tale creatures, a 16th century Pompadour wig to a blossoming flower headdress for Beefeater Gin, a single black eye to a full zombie make-up for Jamie tâs Video Zombie.

I get regular commissions for mask making, such as my dog mask creations for a Radox commercial & the Sci-Fi Channel. Other examples of my Tech-Effect work is my âBrintons Seasons Advertising Campaignâ where I created
costumes & headdresses out of carpet, following in the footsteps of Vivienne Westwood who did the campaign over 10 years ago.
Also popular are pieces like my gem-encrusted masks & skulls, my butterfly masks & antler headdresses. Many of my pieces have featured in such magazines as Teen Vogue, Italian Vogue & Tatler to name but a few. I have also made pieces worn by artists such as Florence & The Machine, Kylie Minogue, Lady Gaga, Bat For lashes, Ladyhawke, Little Boots, Goldfrapp and Daisy Lowe.
I like the challenge of making a theatrical, elaborate piece that can be worn, be performed in, and be functional, and looks amazing as an art piece on its own.

I also like to use natural materials in my work, fresh & dried flowers, leaves and taxidermy. I completed a Bird Taxidermy course with the wonderful Mike Gadd in Yorkshire. I use these skills from time to time to preserve a birdâs wing for a headdress or an art piece. I use birds that have died from natural causes, occasionally found in the woods, or if it is a by-product of what is consumed.


This wide range of skills helps me to stretch across the stylistic spectrum of being naturalist & subtle to outrageously theatrical. This variety keeps my designing skills fresh & original & to be able to take on any type of project whether it has a commercial brief or is for a niche-market and high concept.
Please feel free to contact me direct to discuss any projects.

To view CV click on link at the bottom of the page.